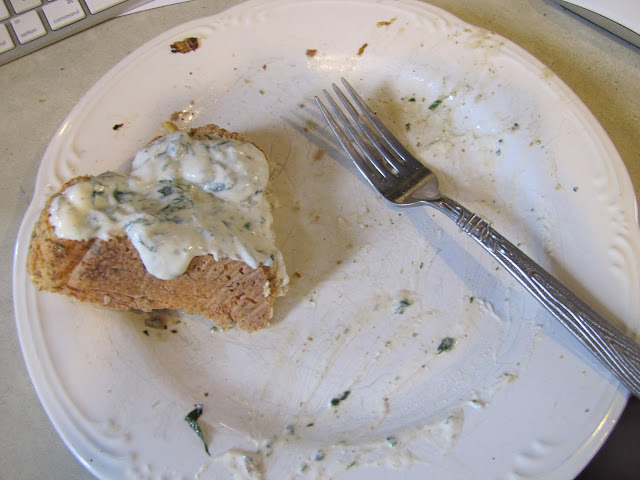 Our swiss chard has taken off in the garden.  While Thomas weeded yesterday he picked up the pieces he broke off while weeding.  This gave me a large quantity of chard to deal with in a timely manner.  This is one of the recipes I made, Thomas was skeptical, but it turned out amazing, a bit like a spinach dip, only not.  We ate every last bite.  The only variation I will explore in the future is to make more of it at a time.  It was so good in fact, I forgot to take a picture before we were done eating.  SO this is the remnants of the final bites.

Directions
Prepare an ice bath; set aside. Bring a large saucepan of water to a boil. Add chard; cook until just tender, 3 to 5 minutes. Drain. Immediately plunge into ice bath to stop the cooking. Drain.
Using a mortar and pestle, grind garlic and salt into a paste. Stir chard, yogurt, garlic paste, oil, lemon juice, and cayenne pepper in a medium bowl. Serve with pita wedges, bread or crackers. Tzatziki can be refrigerated in an airtight container up to 1 week.
Posted by Unknown at 1:04 PM No comments:

Flock of the Month 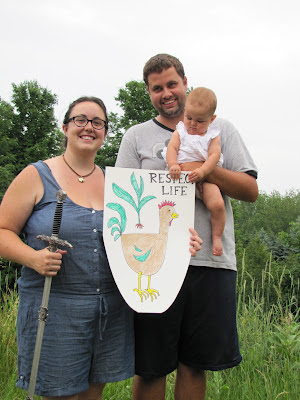 A few months ago we learned about the web site, www.Eggzy.net through a great magazine we love reading, GRIT.   It is a site that allows you to track your chicken eggs and who lays them and allows people to see your egg stand and message you for eggs if they wish.  We figured why not?  Give us a way to keep track and allow our friends to see online if we have any eggs available or not.

Last week they emailed me, asking if we would be interested in doing an interview with them and being the featured flock of the month on their blog!  I of course said, NO, just kidding, I of course was super excited and said, YES!

Here we are this week, we've gone through the interview and now the feature is up!  We're so amazed and proud!  Plus its funny to be called a modern homesteader, when just a couple months ago, I came to the realization that we are modern homesteaders and that we are foodies (but that's another story entirely).

Please visit their feature of us and be impressed by how awesome we sound through a strangers eyes :)  This may or may not also lead you to our Flickr feed, if it doesn't you should check it out, see more photos of our ladies!

Posted by Unknown at 7:54 AM No comments:

Make Your own Dishwasher Detergent

Making our own dishwasher detergent is something I had wanted to start doing for quite some time.  We stopped using "conventional" detergents probably 5 years ago.  They contain a huge number of things I don't want in my home: phthalates, chemicals, animal fats (which are in all name brand non-organic detergents) that stick to the septic tank and can't be removed, oh so too many to name.

Any who, once we made this decision years ago, we embarked on trying every "green" organic dishwasher detergent there is, because let's face it, if you make as much food from scratch as I do, you make A LOT of dishes.  When I say a lot, you are probably imagining your sink and thinking, yeah I'm sure I have more than her sometimes, but no.  Imagine you're biggest dish pile and then probably times it by five and then maybe that is how many dishes I make on a daily basis.  That's right, its not pretty.

So after years of using CitraSolv which totally works awesome, way better than all other organics, but costs $8 a pop if it's not on sale, I decided to finally explore making our own and try to save some money!

After deciding this I researched a few recipes, mostly on Mother Earth News (if you do not subscribe to this magazine, you must, it is the best cover to cover reading ever and I love love love love love it and strongly believe whether you are a organic market freak like me or not, you will love it too for its free thinking important environment fact providing articles every month).  There are recipes for liquid and powder detergents, I'm used to powder ones and for some reason just seems smarter, like it will hold better in my cupboard, plus I think its more cost effective as castille soap is one of the main ingredients in the liquid versions, which is a bit pricey for how much you need and how far it goes.  (I think, don't quote me on this, as I have not officially done the math).

I have since made quite a few of this and come to a somewhat happy conclusion with the recipe.  I still feel there is a bit more film than I am 100% happy with, however, it is easy enough to wipe off when pulling out of the dishwasher while I decide how to further refine my recipe (which I will discuss in the recipe below).

So here's the recipe:
Mix together in a big bowl trying not to breath in citric acid when you do it, because it burns your nostrils and throat, trust me, and let dry (for a few hours, but not if its humid and keep stirring occasionally), then store in a container that will keep it dry (I use a big ball jar).  They say you can substitute 4 lemon Kool-Aid packets for the citric acid but I have not tested this and do not know how it works.  To use just put it in the dishwasher receptacle same as any other powder detergent.

Now, onto the details of how it works and the things I've learned.  Firstly, do not leave out the citric acid powder and do not skimp on it.  There are many recipes out there that do not have this ingredient included.  I tried many of them and they all left massive film.  Even with this 1/2 cup I feel there is still a bit too much film.  This is when I experimented with putting vinegar in the rinse aid.  This seems to help greatly.  I still feel there is more film that with my old CitraSolv though, so I will probably be adding more citric acid to the next batch and see how it fares.

The grapefruit essential oil is just to make it smell pretty really.  You could use basically any essential oil you wanted, the cost of them varies greatly depending on the scent you choose, which is based on how difficult is it to extract the oil and how much do you get per whatever it is you're extracting.  Grapefruit and other citrus are some of the easiest and generally cost the least out of the choices.  We buy ours at Oryana, but many natural stores and online stores should have it available.

Citric acid may seem like a weird ingredient to find and you would be right.  We originally were buying it from Oryana in the bulk tea section.  It was the most expensive of all the ingredients at $8.99 a pound, but because you didn't need much, it still added up to less than our premixed CitraSolv.  Then a couple months ago when I needed to remake a batch, they were sold out, not for a day or two, but like a month and a half.  I asked why and when they would get more in, they informed me that the "great" Dr. Oz said it helped your pH or something if you ate it and so it was sold out nationwide for an unknown amount of time because suppliers couldn't keep up.  This blew my mind, that one celebrity can cause a nationwide shortage.  AMAZING.

Anyway, this lead to locating another source.  We happened to be looking through one of our beer brewing catalogs and discovered that it is sold in massive quantities for cleaning beer equipment at  HALF the cost that it is from Oryana.  So we have now switched to purchasing it in major bulk online from Midwest Supplies, where we get all our beer brewing stuff (they're awesome, perhaps I can write more on them later).  The link to that is here, http://www.midwestsupplies.com/citric-acid-1-lb.html if you are interested in getting your own supply.

For purchasing Borax and Washing Soda, I was at a loss, all recipes I looked at said that it was available everywhere, but I had never remembered seeing it anywhere.  So I headed to Meijer and went on a search, it took some doing, since no one seemed to know what I was talking about, and I barely did myself, but I eventually found it.  Not with dishwasher stuff, not with laundry stuff, its with the like silver polishing and weird cleaners section, on the bottom bottom shelf, both sitting right next to each other.  I couldn't believe how cheap both were, especially cause they are pretty good sized boxes and you don't need it all for a batch, it makes about 3-4 batches per box.

So that's it, go forth and test.  If I have forgotten something, just message me and I will answer.  As I said, I will keep tweaking with mine and if I get any new successes I will be sure to pass it along!


UPDATE 1/31/13 - Since writing this blog originally, we have started adding 1 cup of coarse salt to our mix.  This seems to improve the hazy residue from occurring as badly.  We have also started running every 10th load with a heavy dose of vinegar just shot in the base of the dishwasher to cut down on some of the buildup of calcium and iron that we get here with our well water.