So here we are the beginning of April, still buried in feet of snow.  It's getting just silly.  However, we are still trudging forward with our gardening and CSA adventure.  Our seedlings are growing, new fruit bushes are arriving, chicks are arriving, pigs are ordered and sap water is pouring out of our trees for maple syrup.  We have more volunteers for helping with the expansion and are making plans for where to start as soon as this snow does finally leave us.  We promised to keep you updated with our progress, so you can be a part of this gardening experience, whether you're a part of our mini-CSA or not!
First up:  Seedlings

We've planted a number of seeds so far, so they'll be ready for transplant at the right time (hopefully).  So far, we've got a few started that are a bit earlier than we normally would.  Since we're doing this mini-CSA thing, we're trying to see if we can have a few early season veggies ready for transplant and picking, sooner than you would if we just direct sow as we typically would.  Once the snow melts and we can start to till the ground, we will get these early bad boys in and covered with a new mini row "hoop".   This should protect them enough to continue growing through the slightly colder temps and give us a few extra treats in our boxes!  Those seedlings that we've started a bit early are Red Romaine Lettuce and Chioggia Beets.   We will be starting more lettuce this weekend, allowing for a hopefully continuous stream of lettuce, rather than LOTS and then none.

The rest of the seedlings planted already, are because they need a lot of time to grow big enough for transplanting outside.  So far we've started, Anise, Jade Eggplants, Curly Parsley, Lemongrass, Himalayan Rhubarb, Bandit Leeks, Colorado Shallots, Stevia, a special variety of asparagus, Pepino Melon, some tomatillos and a variety of currant tomatoes.  We'll be starting a lot more seedlings this weekend, as soon as they arrive from the supplier!

We are adding a lot of new fruits to the yard this year.  Many of those come dormant, expecting to be placed into the ground immediately and then grow in as the weather slowly warms.  Our ground is still snow covered and frozen solid, so transplanting right now is not an option.  We have planted these in buckets inside and are keeping a watchful eye.  We are pretty sure with the way the weather is headed, they are going to come out of dormancy, they'll be inside so long.  So we'll have to make some judgements and hardening decisions before moving them outside.

So far we have received two grapes, which is a brand new addition, we've never had grapes before.  Not sure yet where they will go, want to be sure we leave room for more next year.

We have also gotten two saskatoon bushes, another brand new addition.  Also not sure where the saskatoons will go.

We got one bush cherry, which is essentially a bush, that grows cherries, so we'll see how that goes.  Our other cherry trees are in the front yard, but I am thinking perhaps this bush cherry will go over the hill below the gardens.

We have two new gooseberries, both different varieties and both different from the one four year old bush we already have.  We are hoping to put them all near to each other, which is to the right of the existing terraced garden, if you're standing at the top of the hill.

We have two honey berries, which are again, new additions.  They are sort of like an oblong blueberries, but they appear and ripen before strawberries!  Very excited to have this new early fruit on the homestead, I think these may actually make it into the front yard herb gardens.

We've gotten 25 new earli-glow strawberry roots.  Those will be added to my existing strawberry bed (on the left side of the large back deck) and will be a welcome addition.  Earli-glows are my favorite variety, they are a bit smaller, but are pretty much the sweetest of all strawberry varieties.  Very pumped for these to expand the patch.  We also should be receiving another variety of strawberry later this month, to completely fill the rest of the patch.

Finally, we've already received four different varieties of blueberry plants.  They are completely dormant, so we'll see if they can manage to stay that way until we can transplant.  The blueberry patch was started just last year and is on the hillside just above the existing tiered garden.  These will be added in along the stairs and up the top edge of the berm.  We should be receiving more blueberry bushes later this month.

We have already received our American Groundnuts and our Jerusalem Artichokes.  Both of these are vegetables that grow underground, like potatoes and sprout leaves and beautiful flowers above.  Both of these are probably going to be put into new gardens down below, that don't yet exist....  So right now, they're in the refrigerator to stay dormant.

Our first batch of baby chicks came in this week.  This first batch has some of the most rare and EXPENSIVE birds I've ever ordered.  We are adding Welsummers, Salmon Faverolles, Lavender Orpingtons and Blue Ameruacanas.  All should be a great addition to the beauty of the flock and the diversity of the egg colors!

They are cuter than ever this time around.  Arya is in love with them, even reading them books and showing them the photos.  They arrived in very cold weather, unfortunately there were more dead on arrival than normal, SIX dead!  It is a bit sad, but it is the reason I order more birds than I actually want/need.  You never know what will happen in transport and the rare breeds are nearly impossible to reorder in the same season if you haven't already ordered in the previous year.

We are excited to see their stunning growth process unfold before us.  Already at a few days old, their pin feathers are coming in and they are getting their cockscombs!

It's also refreshing to see new babies that can eventually be added to the flock.  Particularly today, as a predator dug through the frozen earth, 18 inches, into the chicken run and escaped with two of our lovely ladies.  A white cochin and my only remaining silver laced wyandotte were taken.  Since we have had many predator attacks before, we aren't exactly shocked, though it is still sad and deeply frustrating.  We have refortified the coop and run and hope that tonight the little devil fox doesn't fair so well.  Unfortunately, we don't think we have a trap big enough to catch him, but we'll set it just the same and see what happens.... 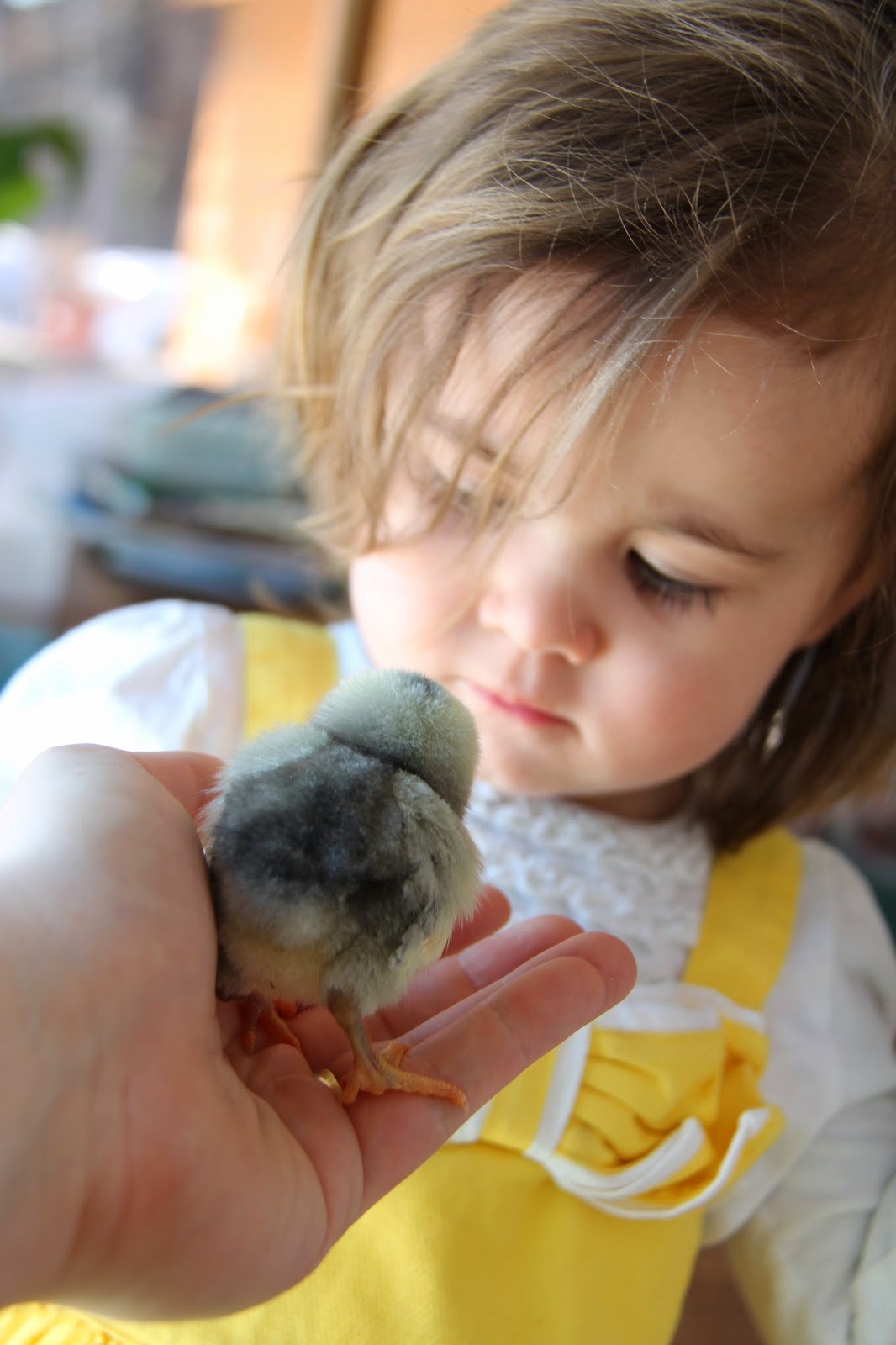 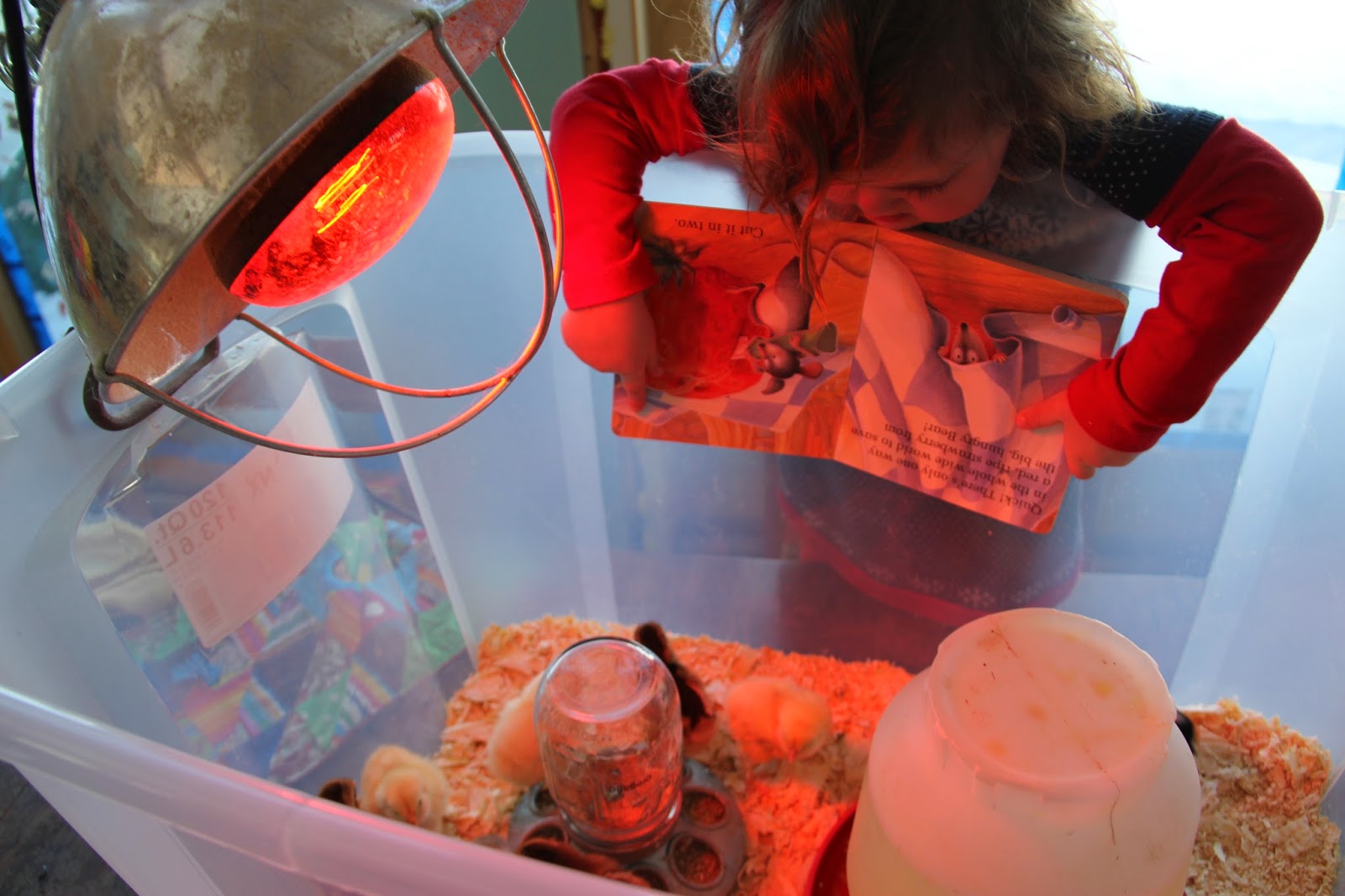 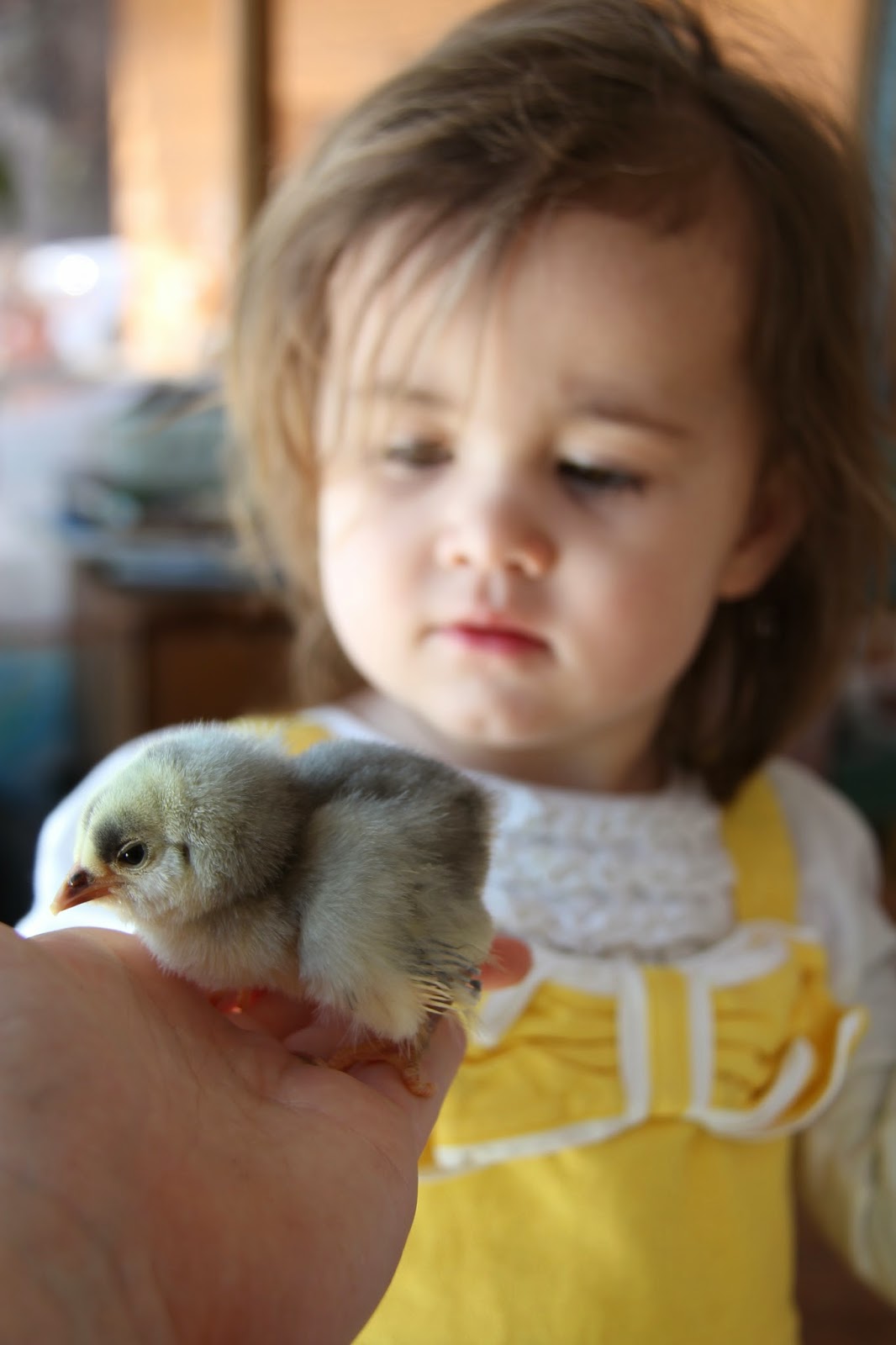 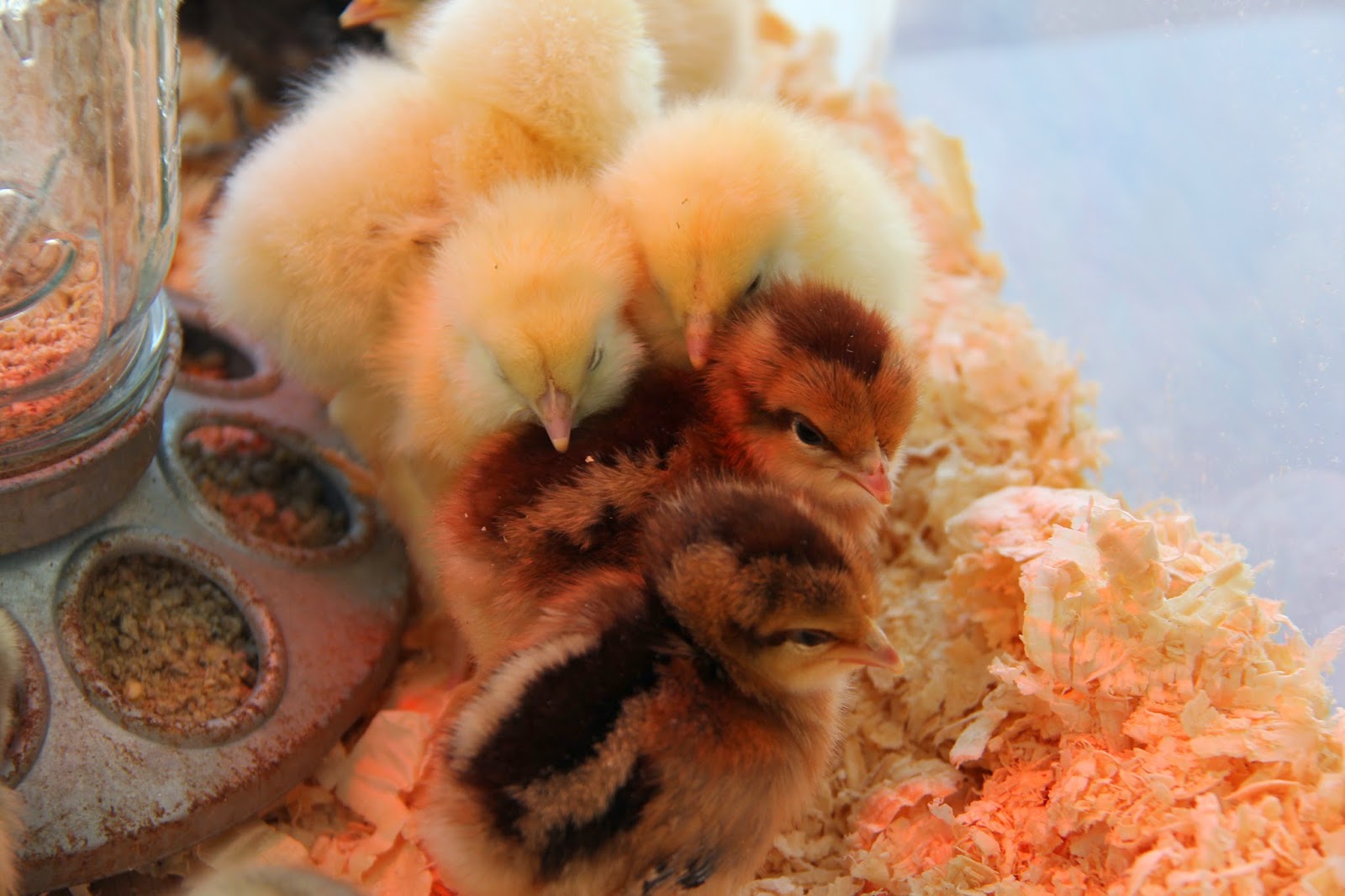 For those unaware, we are going to be finally adding pigs to our homestead this year!  We have ordered five little buggers and will hopefully be welcoming them sometime in May.  After transplanting and cleaning up the expansive raspberry patch their new run and structure will be top priority!

This is our first year collecting sap water and making maple syrup, but so far we are beyond happy with the decision to try.  It has been extremely easy and we are kicking ourselves for not having tried this sooner.  The sap is pouring out of the trees and we're getting so much that there's no more room for the bags in the chest freezer, so boiling now became a crucial advancement in the process and could no longer be put off.  Today is the first day we have started boiling and so far it seems to be going great.  No boilovers, no burning and it smells awesome.  It's amazing to us how quickly the water starts to tint to syrup color.

After hearing about all the rage of drinking sap water like coconut water, we obviously had to try that too.  The verdict delicious.  A little hint of syrup and a nice refreshing feeling.  I learned that there is a company in Canada that sells it bottled, but carbonates it, so we are totally going to try that too with our soda stream.  We'll keep you posted on how that goes. 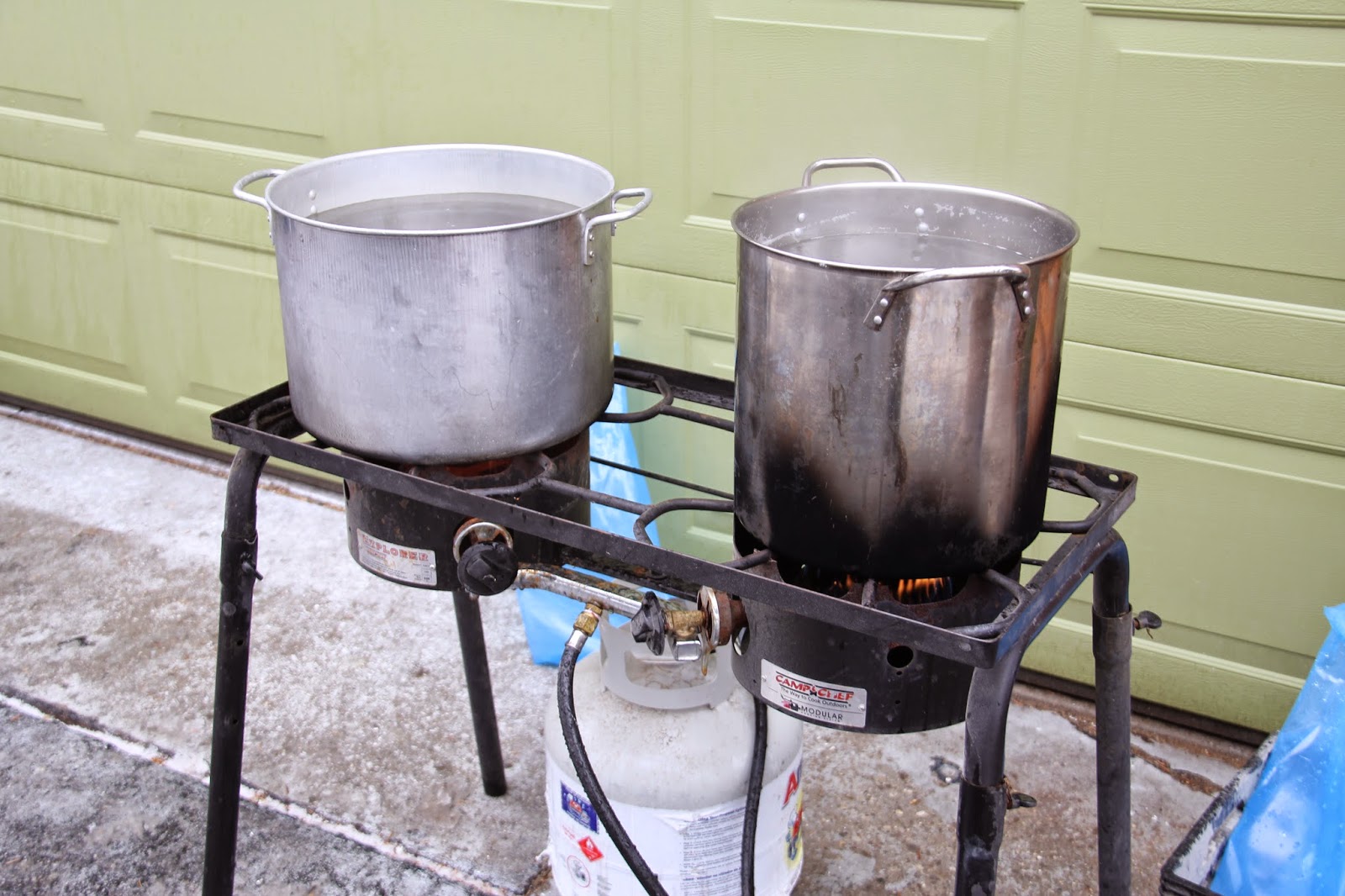 I think that's finally all our gardening adventure updates!  We'll keep you posted as things progress!  And in the meantime, keep thinking melting snow thoughts!!!!
Posted by Unknown at 1:55 PM No comments: